Check out the FIFA22 Premier League Team of the Season! 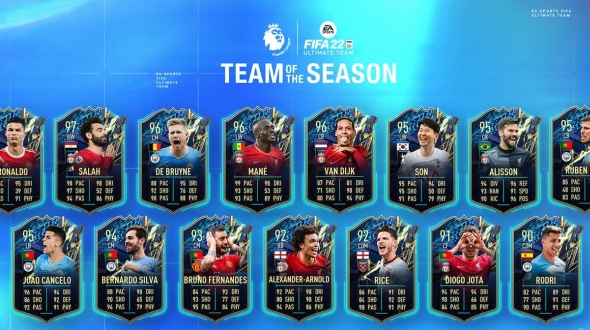 Spoiler: it’s a cracker of a team!

As we wrote just earlier, the Team of the Season reveal is always one of the most exciting for both football fans and FIFA22 fans on the FUT calendar every season. EA Sports, the developer behind the hugely successful game franchise, reveals more than twenty different Teams of the Season in May and June, including the Community Team of the Season, the CONMEBOL Team of the Season and, of course, the Premier League Team of the Season. As one of the best leagues in the world of international football, this season’s top selection from the English topflight is once again filled with superstars.

The Premier League’s status as one of the very best domestic leagues in the world has led to a huge influx of global talent. This is abundantly clear when looking at the FIFA22 Premier League Team of the Season, which contains no less than nine different nationalities. The Portuguese national team dominates this season’s selection with an impressive six names, headed by Manchester United’s Cristiano Ronaldo. Together with Dutch defender Virgil van Dijk, Belgian midfield maestro Kevin de Bruyne, and Senegal superstar Sadio Mané, the Portuguese legend was given a rating of 96. Only Liverpool’s Egyptian talisman Mo Salah outdoes them by a single point.

As far as the English players go, representation in this year’s Team of the Season is up to Liverpool set-piece specialist Trent Alexander-Arnold and West Ham’s extremely talented midfielder Declan Rice. They were given ratings of 92 each, which places them just above the team’s lowest-rated players Diogo Jota (91) and Rodri (90). This means that popular English players like Tottenham’s very own Harry Kane, Man City star Phil Foden, and Chelsea engine Mason Mount all miss out this year. Don’t worry though, bar injuries and other unexpected events, they will all be featuring at the World Cup later this year!