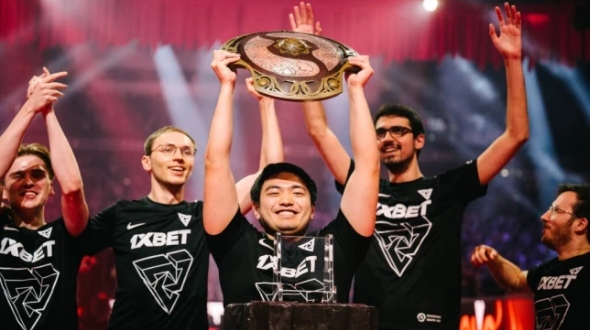 Great success for esports in the UK and fans of Dota 2 in particular, because London-based esports organisation Tundra Esports managed to clinch the world championship title. At The International, as the official Dota 2 world championship is called, Tundra lived up to the expectations as one of the favourites for the victory, not losing a single match on their way to esports glory. The event was held at the Singapore Indoor Stadium in Kallang, Singapore, from October 15th to October 30th 2022 and boasted a total of £16,3 million in prize money of which Tundra took home 45% or a whopping £7.4 million.

As we briefly mentioned earlier, Tundra started The International as one of the favourites and they did not disappoint. In a group with several other powerhouses, including Esports Awards 2020 “Esports Team of the Year” Team Secret, Peru-based Thunder Awaken and fellow European side Fnatic, the London-based esports outfit had a perfect run. They did not lose one of their nine games, winning five and drawing four, which was enough for a first place in Group B and qualification for the upper bracket.

Tundra managed to maintain its superiority during the Main Event, in which two-time The International winners (2018, 2019) OG were eliminated two to nil. They repeated that performance against Chinese organisation Team Aster in the next round, thus qualifying for the upper bracket final. This meant the second showdown against Team Secret and once again Tundra was victorious, this time beating the former DreamLeague champions (2020) 2-1 and sending them to the lower bracket final to face Team Liquid.

The upper bracket final was not the last time Secret and Tundra would meet each other though, as a third and, for the moment, final encounter came in the Grand Final. Team Secret won the lower bracket final against Team Liquid 2-1, which meant that Tundra was once again waiting for them in the biggest match of the year. Unfortunately for Secret, the British organisation was just a level above the rest this tournament and it showed in the final result as well. Despite the Grand Final being played in a best-of-five format to allow for extended action, Tundra dominated with a 3-0 score as final result.

Even though Tundra Esports has its headquarters in London and is considered a part of esports in the UK, its roster is about as international as it gets. At The International 2022, the team consisted of Oliver “skiter” Lepko (Slovakia), Leo “Nine” Kirilin (Germany), Neta “33” Shapira (Israel), Martin “Saksa” Sazdov (North Macedonia) and Wu “Sneyking” Jingjun (United States). Tundra is coached by Canadian former player Kurtis Daniel Ling and managed by his compatriot Curtis Coffin, with Lara “Hoxieloxie” Scofield the official streamer for the side. Their victory at The International 2022 was worth £7,4 million in prize money, more than any other title in the history of Tundra Esports.