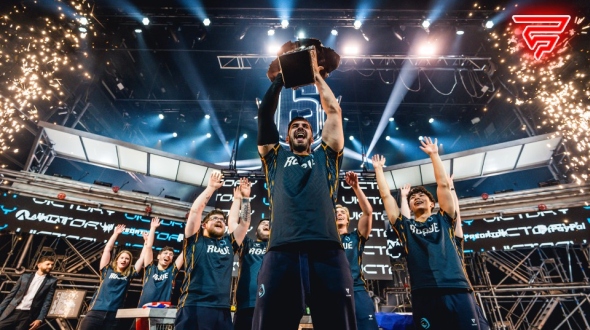 Rogue, the successful Berlin-based esports organisation known for its roster of celebrity investors including DJs Steve Aoki and Nicky Romero, has claimed its first Rainbox Six Siege Major this week. The team, representing the whole EU region, beat favourites FaZe Clan in a breath-taking final of the Six Berlin Major to take home the prestigious title and a whopping $200k in prize money. With Leon “LeonGids” Giddens filling the role of In-Game Leader (IGL) for Rogue, the team’s victory also represents a nice achievement for esports in the UK.

It might sound crazy, but Rogue’s victory actually represented the first win for Europe in 1,015 days. With the victory, the EU region overtakes the North American region in terms of Rainbow Six Major victories overall. Winning the grand final against FaZe Clan also resulted in milestones for several of the team’s individual members. Finnish member Juhani “Kantoraketti” Toivonen became the first two-time Six Major winner, while the Six Major Berlin title was the first tier-one LAN title for both British players Matthew “meepeY” Sharples and the previously mentioned LeonGids. On top of that, Swedish-Thai player William “Spoit” Löfstedt became the youngest-ever Major champion at just 18 years old, while Tom “Deapek” Pieksma became the first Dutch Major champion in just over six years. Celebrations all around therefore, on team and individual level.

Rogue underdogs in the grand final

In big part due to their relatively new player roster, Rogue was not considered a favourite for the final victory in Berlin. They finished second in Group A, behind America esports organisation XSET, but managed to make their way through a complicated series of knock-out stages on their way to the final. The likes of G2 Esports and once more XSET were beaten, after which FaZe Clan, one of the favourites in Berlin, was waiting for Rogue in the grand final.

What followed was a final showdown for the ages as Rogue and FaZe Clan battled it out in what is now a historic grand final. The Six Berlin Major grand final consisted of no less than 69 rounds, including the final round for Rogue’s monumental win. FaZe was beaten 3-2 in a thrilling five-game series, which saw Rogue win their first-ever Rainbow Six Major as well as $200k worth of prize money.

Rogue’s British In-Game Leader has another reason to be happy on August 21st, as it was his birthday as well. “23 and I’m playing a grand final of a major, could be worse ways to celebrate”, he wrote on Twitter in the build-up to the big event. British host and streamer for Guild Esports also joined in the celebrations, lauding LeonGids on his Twitter account. “LeonGids is a special dude”, he wrote after Rogue’s victory in the semi-finals, “He’s been a great friend/supporter of mine since my first Siege event in 2019. Seeing him killing it live at this Major has been unreal”.