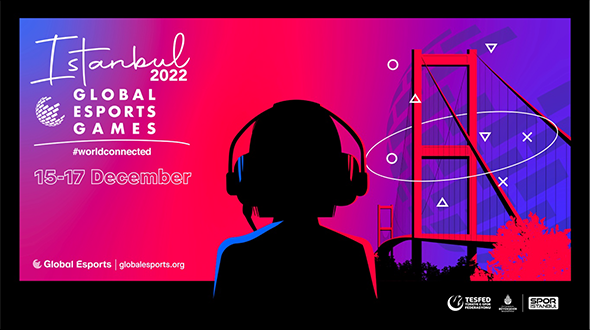 With every day that passes, the Global Esports Games 2022, one of the major international esports of the year, edges closer. Just a week ago, we published an article on our sister website for British esports that Team Great Britain has announced its team for the upcoming Games as more and more nations are finishing their rosters. Now, the organization of the event has also made a reveal itself, because the logo, wordmark and key visuals for the second edition of the Global Esports Games have been introduced to the public.

Entirely in line with the Global Esports Federation’s motto of #WorldConnected, the newest visuals for the upcoming esports event represent just that. The logo, wordmark and visuals make references to the Bosphorus Bridge in Istanbul, Turkey, where the Global Esports Games 2022 will be held from December 15th to December 17th at the Hilton Istanbul Bomonti Hotel and Conference Center. As the Bosphorus River forms a natural border between the European and Asian continents, the two bridges over that majestic river are literal symbols of connection.

Furthermore, the visuals for the event convey a strong message of symbolism, energy and importance. They obviously feature some of the most popular esports characters, as well as an image of a bridge connecting the world right next to the event’s wordmark. The same visuals will be used to introduce and promote GEFcon, the convention for thought leaders organized alongside the Games, and GEFestival, the event celebrating esports, entertainment and youth culture that will take place at the same time as well.

“The Global Esports Federation is proud to be hosting our flagship event in Istanbul and excited to be sharing the Global Esports Games with the #worldconnected community for a second time", says Chris Chan, President of the Global Esports Federation, after the announcement of the logo, wordmark and visuals for GEG2022, “I would like to acknowledge the time, passion and dedication from Istanbul’s Organizing Committee and GEF’s Coordination Commission. We cannot wait to be together in December and experience the energy of this incredibly dynamic city, together”.

The qualifications for the Global Esports Games 2022 have been underway since the first weekend of October in four different categories: eFootball PES2022, Street Fighter V, Dota 2 and PlayerUnknown’s Battlegrounds (PUBG). That’s one more title than last year, when the event did not feature an official competition for PUBG. This is yet another indicator of the growing popularity of international esports, not just for players but for viewers as well. When Istanbul was announced as host city for the Global Esports Games 2022, the Global Esports Federation also revealed the host cities for the coming editions of the vent. Next year, the international esports community will touch down in Riyadh, Saudi Arabia, followed by China in 2024, the United Arab Emirates in 2025 and Malaysia in 2026.