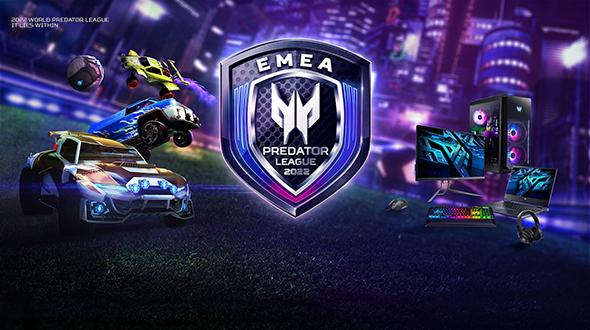 British esports organisation Endpoint has been crowned champions of this year’s Predator League UK Rocket League tournament. The Sheffield-based group, who on its own website describes itself as “the UK's most successful and biggest esports organisation north of London”, completed an impressive upper bracket run to reach the finals, where I Am Finished were beaten in convincing fashion. Besides the £2,500 worth of prize money, the victory has also brought Endpoint a coveted ticket for the Predator League EMEA (Europe, Middle East, Africa) finals. The Main Event will be played on Sunday November 20th, the same day as the start of the 2022 World Cup football, and will take place entirely online.

The EMEA Predator League 2022 is a major Rocket League tournament hosted and sponsored by Acer Predator for professional teams from Europe, the Middle East and South Africa. The Main Event consists of two groups containing seven to eight teams each. The best two teams from each group qualify for the EMEA Predator League 2022 Playoffs, the other teams are eliminated from the event. The Playoffs take place inside a Double Elimination Bracket structure, boasting a standard upper bracket and lower bracket, and all matches are best-of-7 encounters, meaning that a participating team needs to win four games in order to win a match. The total prize pool for the event sits at £15,000 with £8,500 reserved for the eventual winner. The runner-up takes home £4,500, while the tournament’s number three wins £2,000.

As mentioned earlier, by winning the Predator League UK, Endpoint has qualified for the Main Event, where they will face the best Rocket League teams from the EMEA region. These include several big names, including Berlin Wildcats as the winners of the Predator League Turkey, Guild Esports as champions of Spain, and Rest in Peace from Romania. In total, fourteen teams will be competing on the 20th of November.

The Predator League UK victory was not the only big news regarding Endpoint recently. The organisation also announced a revised player roster, including some major British Rocket League talent. Most of the spotlights were aimed at the presentation of David “Deevo” Morrow, the British former Guild and FC Barcelona Esports player, who reached the Rocket League Championship Series (RLCS) Season 2 grand final and went on to win RLCS Season 3 the year after, crowning himself world champion. He is joined by compatriot Shaun “Crispy” Tafara Murindagomo, who won Hyperluxe Founder Series Day 1 earlier this year among other events, and Lithuanian Rocketment Grand Slam 2022 winner Simas “simas” Gurskis. Slovenian former pro player Jaka “Keda” Kedacic has joined Endpoint as coach for the new team.