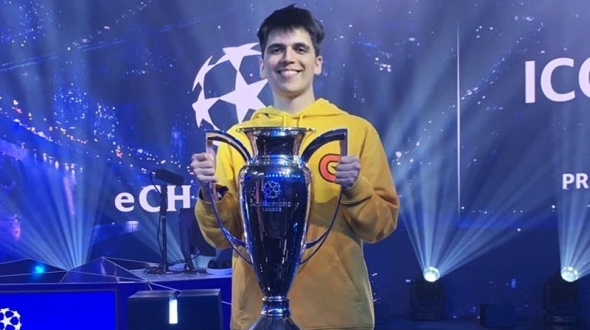 Major success for esports in the UK and for Guild Esports in particular, as their Argentinian contract player Nicolas “nicolas99fc” Villalba managed to clinch the 2021-2022 FIFA eChampions League. After winning the FIFA19 PS4 Playoffs in 2019 and the FIFA eClub World Cup 2019 in the recent past, this is the player’s first victory in the eChampions League after consistently ranking among the world’s best FIFA players since 2018. For London-based Guild Esports though, Villalba’s victory represents the organisation’s sixth major trophy.

The road to glory in Stockholm, Sweden, was a long and hard-fought one for nicolas99fc, as he had to play his way through a stacked roster of participants, including Fnatic’s Tekkz, with whom he teamed up in 2019 to win the FIFA eClub World Cup, and RBLZ Gaming’s Umut, winner of the Virtual Bundesliga 21-22 Club Championship. The Grand Final went down between the Argentinian and Mattias “matisbonnano99” Bonanno from Team Heretics, which the former managed to win 7-2. Besides the prestige and the $ 75.000 cash prize, Villalba also secured a spot for Guild in the FIFA22 Global Series Playoffs that will be taking place in July.
“This is a very special victory for me and I can’t wait to get home and celebrate”, said nicolas99fc after his impressive eChampions League achievement, “Since joining Guild [in December of 2021] the coaching and set-up has been perfect to allow me to improve and achieve these sorts of victories, and there is much more to come”.

The player’s sentiment was naturally echoed by Kal Hourd, CEO at Guild Esports, as he lauded the Argentinian youngster’s mentality and skills. “We couldn’t be prouder of Nicolas’ incredible achievement, he perfectly embodies the winning mentality and professionalism that we pride ourselves on at Guild and was so key to the success of that iconic Manchester United squad over two decades ago. We believe this is the start of a long run of FIFA trophies for us. Winning trophies, building a global fanbase and generating media value is exactly what our brand sponsors expect, and the growing strength of the Guild brand helps to support our ongoing discussions with potential new sponsorship partners”.

It was big news for esports in the UK and worldwide when David Beckham announced his minority ownership of Guild Esports back in June of 2020. As a result, the former Manchester United player and England national team captain joined in the online celebrations after Guild’s victory in the eChampions League. In an Instagram Story on his own Instagram account, where he has almost 78 million followers, Becks wrote “Champions of Europe! A proud moment for @guildesports as @nicolas99fc wins the eChampions League Trophy”. On top of that, the eChampions League victory comes at a perfect moment as Guild is about to open its first global headquarters in London. Like nicolas99fc said already, more is surely coming at Guild.