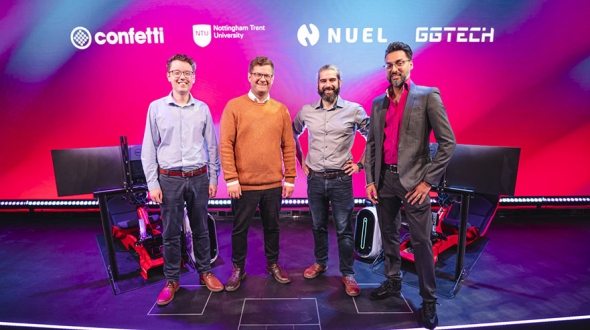 After the successful rounding up of the Amazon University Esports Summer Split 2022 tournaments recently, NUEL (National University Esports League) have not been sitting still. Days after the finish of the United Kingdom’s and Ireland’s biggest event for university esports, the organisation has announced a brand-new partnership with the Confetti Institute of Creative Technologies, which is part of Nottingham Trent University. The deal sounds promising for the further development of esports in the UK and as part of it, the NUEL will be moving its headquarters to Confetti campus in Nottingham.

As the NUEL’s managing director, David Jackson, said after the announcement of the partnership, the focus is very much on the future of esports in the UK. “After the success of our Amazon University Esports tournament in April, we are delighted to continue our collaboration with Confetti who are helping lead the way with their university education and their facilities”, Jackson stated, “It is great that we can continue to help the next generation of students lead a career in esports whether it be in events production, game design, or casting”.

The announcement of the collaboration between the NUEL and Confetti comes as the institute is preparing for the official opening of its long-awaited Confetti X facility. Representing an investment of no less than £5 million, the new facility offers over 14.000 square feet of space dedicated to esports, from training and mentoring and production and support. Students will have the chance to access state-of-the-art esports production technology and other emerging tech, and the facility will also serve as host to plenty of esports tournaments. As a matter of fact, Confetti X has already hosted a few prestigious large-scale events, including the 2022 British Esports Student Champs Finals and the qualifiers for the first edition of the Commonwealth Esports Championships that were organised this summer.

Confetti X will become the default venue for events organised by both the NUEL and GGTech, co-organiser of the Amazon University Esports tournaments and organiser of several other high-profile university esports events throughout Europe. While aiming for more awareness amongst students with concern to the possibility of building a career in the esports industry, those same students will also get the chance to be involved in the production of major esports events held at Confetti X.

As expected, Craig Chettle MBE, the founder and current Chief Executive at Confetti, is delighted with the new partnership as well. “Alongside our longstanding partnership with the British Esports Federation, this exciting initiative with GGTech and NUEL will further support our mission to shape the future of esports education”, he says of the collaboration with the NUEL and GGTech, “We are excited by the opportunities set to be created and are thrilled that NUEL has chosen our campus and Nottingham as its UK base. Our partnership highlights shared ambitions to help advance esports as an inclusive and innovative industry, and I am certain that, together with our new esports production complex Confetti X, this is another step towards making Nottingham a hub of the UK’s esports industry”.