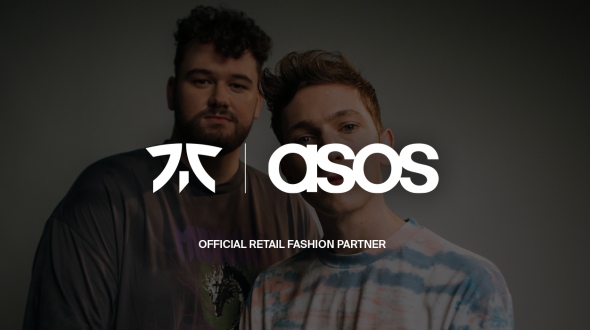 The world of esports in the UK and worldwide keeps expanding, and more and more non-esports brands and sectors are starting to see value in online gaming and its dedicated communities. For our international sister website, for example, we recently looked at the brand-new deal between esports tournament organiser ESL and Spotify, the world’s largest audio streaming service, for the German-speaking market. A great example of industries and services overlapping in order to provide more value for their respective users. In that light, the recent news of the new collaboration between UK-based esports organisation Fnatic and British online fashion retailer ASOS is a nice example as well. Together, the two brands are planning to launch a collection of gaming apparel for men and women.

The new range of gaming clothing is called “Fnatic x ASOS” and will consist of a variety of items, including jackets, hoodies, sweatpants and T-shirts. These will be divided over various Fnatic lines, like Pro Wear, Summer, Autumn and the core collections. This type of collaboration is a first for both parties, but we wouldn’t be surprised to see it become a trend over the coming years. All of the Fnatic x ASOS items have been on sale at ASOS.com since the 18th of July, with prices ranging from £28 for T-shirts to about £100 for a stylish hoodie with zipper.

Naturally, both Fnatic and ASOS are excited about the collaboration and have high expectations. “Bridging the gap between fashion and gaming is something we’ve been exploring in depth over the last 12 months”, says Sam Mathews, CEO and Founder at Fnatic,  “This latest launch with ASOS shows the appetite from the fashion e-commerce sector to tap into our Fnatic gaming community, and we’re confident this drop will be something both gamers and a wider audience can wear alongside their favourite traditional brands”.

Commercial Design and Visual Director at ASOS, Vanessa Spence, echoes this sentiment. “We’re incredibly excited about the latest iteration of our partnership with Fnatic”, she says in reaction to the announcement of the partnership, “As esports continues to boom, we’re seeing GenZ-ers increasingly express their style in both the physical and digital worlds. This is something we’re excited to fuel through this partnership, bringing esports to life with a curation of apparel for both in and out of the gaming chair”.

Not the first overlap between esports and fashion

While the collaboration between Fnatic and ASOS is a promising development, especially due to the scale and scope of the agreement, it’s not the first time that major fashion brands have teamed up with esports brands. In the past, for example, Louis Vuitton partnered with Riot Games, the studio behind League of Legends, for an exclusive Louis Vuitton x League of Legends collection of gaming apparel. In similar fashion, G2 Esports started a partnership with Adidas that saw the German brand become the organisation’s official apparel provider for a period of at least two years.