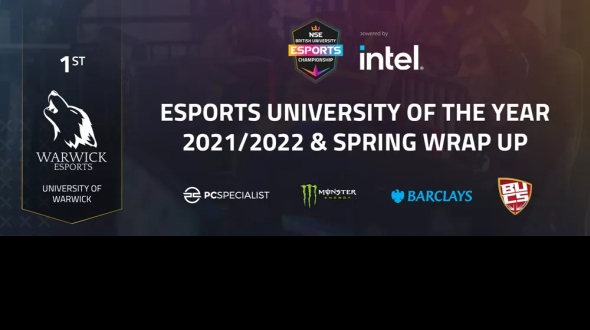 For an incredible fourth year in a row, the University of Warwick has been crowned as the UK Esports University of the Year. Over the 2021-22 season for esports in the UK, they finished first in the British University Esports Championships (BUEC) ranking with a staggering 4,036 points, more than 2,000 points more than runner-up Loughborough University. Warwick did so by clinching first places for different esports titles, including League of Legends, DotA 2, and Counter-Strike: Global Offensive. For the standings and how each participating university earned its points for the BUEC, you can visit this link.

In terms of the BUEC league table, participating teams can earn points by competing in various esports tournaments throughout the year through NSE, National Student Esports. Together with British University and College’s Sports (BUCS), the NSE forms the official governing body for university esports in the UK. The winner of the prestigious UK Esports University of the Year title is the university with the highest total points total gained from competing in the most competitive esports titles on the market. This year, that was the University of Warwick with 4,036 points, as mentioned earlier.

“This year’s win represents another huge accomplishment from every member of our organisation”, says Joshua Mankelow, the BUEC President for the duration of the competition and former President of Warwick Esports, “Every team that we entered into NSE tournaments and every event that was run by our community helped add to this staggering point total. Every single one of our members should be proud of their contribution to Warwick Esports and our status as the UK’s best”.

The current President of Warwick Esports, Caitlin Emery, echoes Mankelow’s sentiment. “I am absolutely thrilled we have held onto our number one status for another year, but this success means so much more than that”, she reacted to her employer winning the title for a fourth year in a row, “Our society has seen immense growth in the last year and our community continues to attract the very best that student esports has to offer. I’m so incredibly proud of how friendly and welcoming Warwick Esports is and this award is an example of where positivity and inclusivity can take you. I’m so happy to see it thrive and I can’t wait to continue this growth and secure the 5th year at the top!”

In the past two years, the University of Warwick made considerable investments into its esports programmes and facilities, which seem to be paying off handsomely. In May of 2021, for example, the university committed to investing no less than £275,000 into the development of a new esports centre at its campus, while just a few months, they successfully applied for a government grant worth £135,000 to expand and improve its esports mentoring programme. If anything, these investments will have only consolidated Warwick’s position as one of the very top esports universities in the UK. Acquiring state-of-the-art equipment, like computers and peripherals, in combination with modern facilities will likely be paying dividends for many years to come.